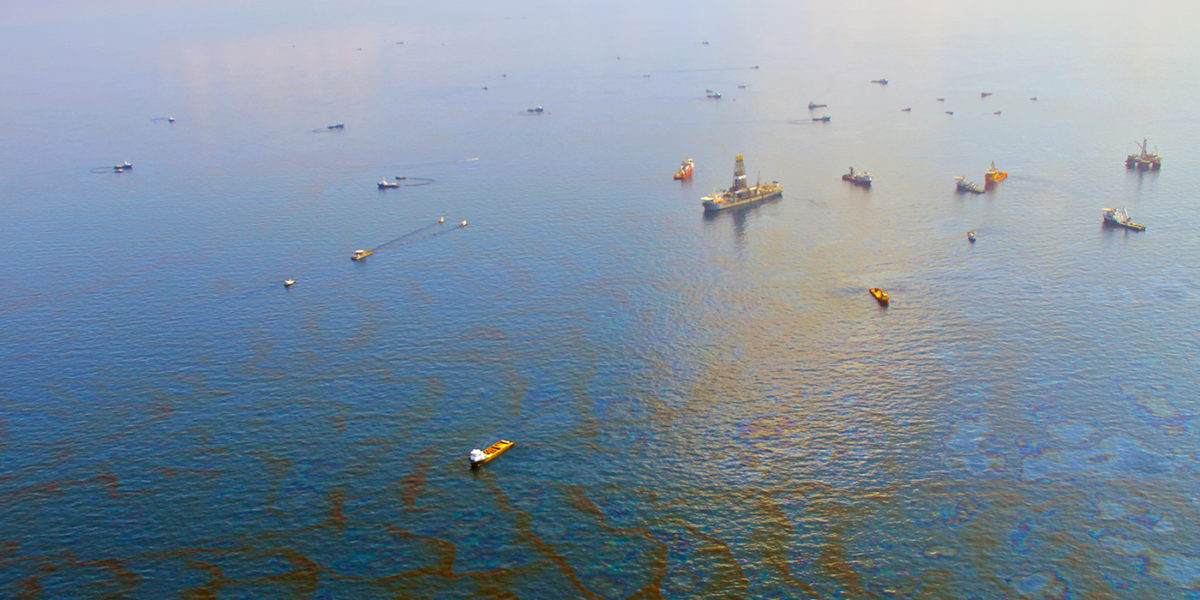 Seven years ago, we mourned the deaths of the 11 who died in the Deepwater Horizon explosion, and watched in growing horror as a torrent of oil poured forth from the depths of the Gulf of Mexico towards some of the most abundant waters of our continent. Like today, it was spring and the diversity of life was particularly rich. Atlantic bluefin tuna had migrated there to spawn and were in peak spawning season. The bottlenose dolphins had given birth in early winter and thus both young and old were exposed, especially in Bataria Bay, one of the most heavily affected sites. It was peak nesting season for brown pelicans. Healthy, productive oyster reefs could readily be found. Shrimp boats were out catching brown and other shrimp. Migratory birds were pausing in wetlands on their way to their summer nesting places. A unique population of the rare Bryde’s (pronounced Broo-dus) whales fed in the Gulf’s depths, the only year-round resident baleen whale in the Gulf. Ultimately, the cumulative oiled tuna habitat alone was some 3.1 million square miles. Dr. Barbara Block of Tag-A-Giant and Stanford University said, “The bluefin tuna population in the Gulf of Mexico has been struggling to rebuild to healthy levels for over 30 years,” Block said. “These fish are a genetically unique population, and thus stressors such as the Deepwater Horizon oil spill, even if minor, may have population-level effects. It is difficult to measure recruitment from the Gulf of Mexico post-2010, as the fish take a long time to enter into the commercial fishery where monitoring occurs, so we remain concerned.”1

There seems to be continuing concern about the recovery of shrimp populations, oyster reefs, and other commercial and recreational saltwater species of interest. The “oiling” of seagrass and marshland areas killed off the sediment anchoring vegetation, leaving areas vulnerable to erosion, exacerbating a longtime trend. Bottlenose dolphin reproductive rates appear to have fallen drastically—and mature dolphin mortality appears to be higher.  In short, seven years later, the Gulf of Mexico is still very much in recovery. Hundreds of millions of dollars pour into the Gulf region from the fines and settlement funds paid by BP for restoration of the economic and environmental values of the Gulf. We know that continued monitoring is critical to our understanding of the full impact of these kinds of catastrophic events and of our efforts to restore systems. Local community leaders understand that while the influx of funds is valuable and has helped a lot, the full value of the Gulf and its systems is not what it was 7 years ago. And that is why we must be wary of the approval of any shortcuts to processes that were established to try to prevent such blowouts from happening again. The loss of human lives and the long-term effects on human and ocean communities alike are not worth the short-term economic gain of a few at the expense of millions.