Since 2007, we’ve provided a nonpartisan platform for global collaboration. Scientists, resources and expertise come together through joint research projects. Through these relationships, scientists can then educate decision makers about the state of changing coasts — and encourage them to ultimately change policies.

Finding Solutions to the Ocean’s Problems

Tapping into our Networks to Build Bridges

Providing the Right Tools for Monitoring our Changing Ocean

“It’s a big Caribbean. And it’s a very linked Caribbean. Because of ocean currents, every country is relying on the other… climate change, sea level rise, mass tourism, overfishing, water quality. It’s the same problems that all countries are facing together. And all of those countries don’t have all of the solutions. So by working together, we share resources. We share experiences.”

We tend to organize things as a society. We draw state lines, create districts, and maintain political boundaries. But the ocean disregards any lines we draw on a map. Across the 71% of the earth’s surface that is our ocean, animals cross jurisdictional lines, and our oceanic systems are transboundary in nature.

Lands that share waters are also affected by similar and shared sets of issues and environmental factors, like algal blooms, tropical storms, pollution, and more. It only makes sense for neighboring countries and governments to work together to achieve common goals.

We can establish trust and maintain relationships when we share ideas and resources around the ocean. Cooperative efforts are critical in the ocean sciences, which include ecology, ocean observing, chemistry, geology, and fisheries. While fish stocks are governed by national limits, fish species move constantly and cross national jurisdictions based on foraging or reproductive needs. Where one country may lack certain expertise, another country can help support that gap.

What is Ocean Science Diplomacy?

“Ocean science diplomacy” is a multi-faceted practice that can occur on two parallel tracks.

Through applying the new data and information developed through scientific collaboration, scientists can also educate decision makers about the state of changing coasts — and encourage them to ultimately change policies for a more sustainable future.

When pure scientific inquiry is the common goal, ocean science diplomacy can help build long-lasting relationships and increase global awareness around the ocean issues that affect us all. Our team is multicultural, bilingual, and understands the geopolitical sensitivities of where we work.

We can’t protect what we don’t understand.

We lead with scientific inquiry and foster nonpartisan coordination to address common threats and protect shared resources. Science is a neutral space that promotes continued collaboration between countries. Our work strives to ensure a more equal voice for less represented countries and scientists. By tackling science colonialism head on, and by ensuring science is conducted respectfully and iteratively, resulting data is stored in countries where research is being conducted and the outcomes benefit those same countries. We believe science should be undertaken and managed by host countries. Where that is not possible, we should focus on building that capacity. Highlights include:

We bring together practitioners across the Gulf of Mexico and Western Caribbean Region to share information and coordinate on transboundary migratory species conservation. The Initiative acts as a neutral platform for scientists, government officials, and other experts primarily from Mexico, Cuba, and the United States to chart a course for ocean science free from the specter of politics.

Following two decades of collaboration, we supported a group of Cuban scientists from the University of Havana to conduct a visual census of elkhorn coral to evaluate the health and density of corals, substrate coverage, and presence of fish and predator communities. Knowing the state of health of the ridges and their ecological values will make it possible to recommend management and conservation measures that will contribute to their future protection.

We brought scientists from Cuba and the Dominican Republic together to learn from one another and collaborate on coral restoration techniques in a field setting. This exchange was intended as a south-south collaboration, whereby two developing countries are sharing and growing together to decide their own environmental future.

Ocean Acidification and the Gulf of Guinea

Ocean acidification is a global issue with local patterns and effects. Regional collaboration is key to understanding how ocean acidification is affecting ecosystems and species and to  mounting a successful mitigation and adaptation plan. TOF is supporting regional collaboration in the Gulf of Guinea through the Building Capacity in Ocean Acidification Monitoring in the Gulf of Guinea (BIOTTA) project, which works in Benin, Cameroon, Côte d’Ivoire, Ghana, and Nigeria. In partnership with focal points from each of the countries represented, TOF has provided a roadmap for stakeholder engagement and assessment of resources and needs for ocean acidification research and monitoring. Additionally, TOF is providing significant funding for the purchase of equipment to enable regional monitoring.

We also host EquiSea, “the ocean science fund for all,” which focuses on addressing systemic inequity in ocean science capacity and is led by a group of scientists from six countries.

The Ocean Foundation has been building bridges in places like Cuba since 1998, and we are one of the first and longest running U.S. nonprofits working in that country. The presence of government scientists from Cuba and the U.S. led to a groundbreaking sister sanctuaries agreement between the two countries in 2015. The agreement matches U.S. marine sanctuaries with Cuban marine sanctuaries to collaborate on science, conservation, and management; and to share knowledge about how to evaluate marine protected areas.

Building off the momentum from the Sister Sanctuaries Agreement, we created the Gulf of Mexico Marine Protected Area Network, or RedGolfo, in 2017 when Mexico joined the regional initiative. RedGolfo provides a platform for marine protected area managers from Cuba, Mexico, and the U.S. to share data, information and lessons learned to better prepare for and respond to changes and threats the region might face.

Ocean Acidification and the Wider Caribbean

Ocean acidification is an issue that also transcends politics as it affects all countries regardless of the scale of a country’s carbon emissions. In December 2018, we received unanimous support at the Cartagena Convention’s Protocol Concerning Specially Protected Areas and Wildlife meeting for a resolution to address ocean acidification as a regional concern for the Wider Caribbean. We are now working with governments and scientists throughout the Caribbean to implement national and regional policy and science programs to address ocean acidification.

We train legislators on key topics affecting their coasts and ocean in Mexico, leading to opportunities to draft updated laws. In 2019, we were invited to provide educational programming to the Mexican Senate about the ocean’s changing chemistry, among other topics. This opened up communication about policy and planning for ocean acidification adaptation and the importance of a nationally centralized data hub to facilitate decision making.

TOF co-hosts with the Global Island Partnership (GLISPA) the Climate Strong Islands Network, to promote just policies that support islands and help their communities respond to the climate crisis in an effective way. After the 2022 UN Ocean Conference, we hope to see continued progress toward ensuring the voices of those with the power to make change, and those who are most affected by climate change and ocean destruction, are heard. 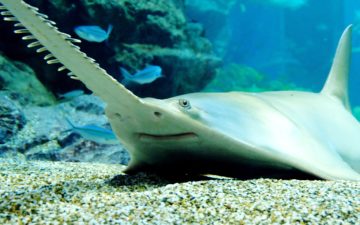 Patience, perseverance and unrelenting curiosity could pave the way for Cuba’s smalltooth sawfish being on better footing than we believed.