The Ocean Foundation’s Channels are standalone websites that showcase our public-facing programs.

In 2018, The Ocean Foundation launched its Waves of Change campaign to raise awareness of the issue of ocean acidification, culminating with the inaugural Ocean Acidification Day of Action on the 8th January 2019. The 8th of January was chosen as 8.1 is the current pH of the ocean, and our goal is to ensure that the pH of the ocean does not fall below that level. TOF will continue to host Ocean Acidification Day of Action events on the 8th of January each year. “Understand the Impact” shows the current effects of ocean acidification and the forecasted effects in 2100 is nothing is done to mitigate CO2 emissions. Users can fill in the gaps in interactive charts to test their understanding of the issue.

To help spread awareness of the website, The Ocean Foundation partnered with Animal Collective and sitar player Ami Dang to release “Suspend the Time” (written by band members Deakin & Geologist) which is available to stream and download through the website. The issue is important to Animal Collective who released the coral reef themed audiovisual album, Tangerine Reef, in August in collaboration with Coral Morphologic, to commemorate the 2018 International Year of the Reef.  “Suspend the Time” was written by Deakin & Geologist, with lyrics and vocals by Deakin. Both are avid scuba divers and Geologist has a master’s degree in environmental policy from Columbia University with a focus on the marine environment and assisted on some of the first CO2 acidification studies on coral growth. 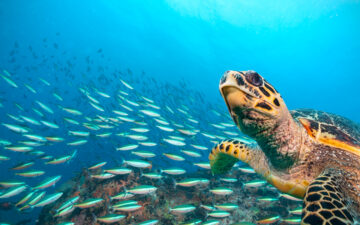