Across the globe, seawater chemistry is changing faster than at any time in earth’s history. As increased carbon dioxide emissions dissolve into the ocean, its chemical makeup is altered, becoming more and more acidic. On average, seawater is 30% more acidic than it was 200 years ago. And while this change in chemistry — known as ocean acidification — may be invisible, its effects are not.

OA is further exacerbated by regional sources of pollution, such as stormwater runoff and local factory emissions. And it’s already having devastating effects on marine organisms and ecosystems. In more acidic waters, shellfish and coral struggle to form their shells and skeletons, fish lose their ability to smell their predators, and crustaceans die before they can reproduce.

Ocean acidification is expected to cost the global economy more than USD$1 trillion per year by 2100.

Despite this great risk, those communities most vulnerable to OA – such as small islands or low income coastal areas – have no infrastructure in place to monitor and respond to the issue. Scientists in Mauritius track the pH of the water using a sensor from our partner, Sunburst Sensors Scientists and trainers from our Ocean Acidification Monitoring Workshop in Mauritius Lead Trainer, Chris Sabine (center) instructs participants how to use lab equipment at our Ocean Acidification Monitoring Workshop in Fiji The Ocean Foundation’s International Ocean Acidification Initiative builds the capacity of scientists, policymakers, and communities to monitor, understand, and respond to OA both locally and collaboratively on a global scale. We do this by creating practical tools and resources that are designed to work all around the world.

Together with our partners, The Ocean Foundation designed a suite of equipment that cut the cost of monitoring ocean chemistry by 90%. To further facilitate the use of these new tools, we hold global trainings and provide long term support through equipment, stipends, and ongoing mentoring.

Since 2003, The Ocean Foundation’s International Ocean Acidification Initiative has fostered innovation and developed strategic partnerships to support scientists, policymakers, and communities around the world. This work is governed by a four-pronged global strategy: Scientists collect water samples from the boat in Fiji Group shot of the Ocean Acidification Monitoring workshop in Fiji

The work of the IOAI, like all our work at TOF, aims to strengthen organizations around the world to help reverse the trend of ocean destruction. Within the IOAI, we do this by providing a combination of technical training, financial support, legal counsel, and direct distribution of field and lab equipment. Our goal is for every country in the world to have a robust national OA monitoring and mitigation strategy, driven by local experts to address local needs. In addition, we coordinate regional and international action to provide the necessary governance and financial frameworks needed to address this international problem.

In the past 5 years we have:

As we enter the next decade, we are energized by the requests we have received to help additional regions and nations take on ocean acidification through science and policy, we are hard at work to continue to develop low-cost and fit-for-purpose tools for monitoring and responding to ocean acidification, and we are confident that together with our partners we will achieve our vision of ensuring every nation can monitor, understand, and respond to ocean acidification.

“It is impossible to overstate the importance of the donation of the equipment and the training provided by TOF. STRI is the only organization in Panama that carries out high quality, long-term ocean chemistry monitoring. Until now, OA monitoring had only been carried out at one location in the Atlantic Ocean. We are now able to carry out the same monitoring at multiple locations in both the Atlantic and Pacific Oceans of Panama. This will be of critical importance to both the scientific community, as well as the nation of Panama”

Dr. Steve Paton, Director of the Office of Bioinformatics at STRI Scientists in the lab in Colombia testing the pH of water 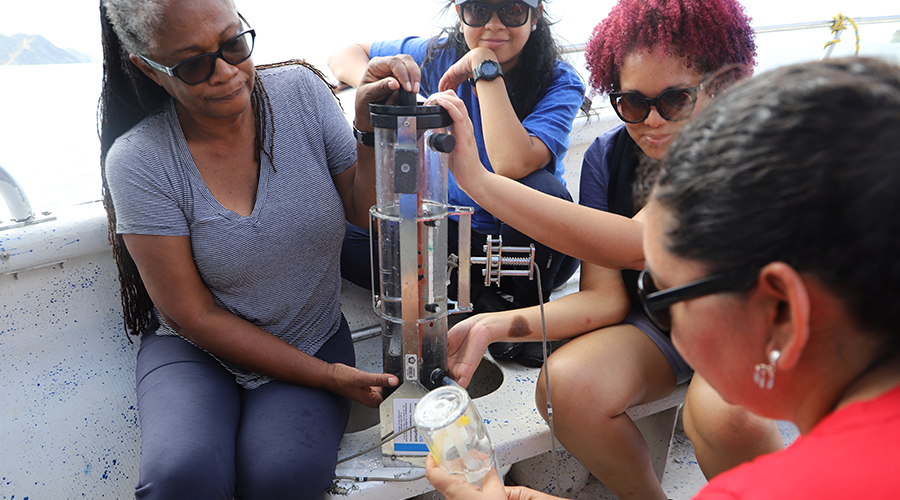 Ocean acidification is considered one of the greatest threats to the health of our ocean. Previous mass extinctions are correlated in the geologic record with increased ocean acidification. There is serious concern among the scientific community that OA could disrupt fisheries that support livelihoods and food security, and that biodiversity will likely decline significantly in the ocean.

Ocean acidification is caused globally by carbon dioxide emissions, and can be exacerbated locally by introduction of carbon into the water, such as through excess fertilization or waste water. In order to minimize and halt OA, global CO2 emissions must halt or significantly decline and local sources of carbon must be reduced. Reducing CO2 and local sources of carbon not only helps to stop ocean acidification – it halts climate change and improves coastal water quality. OA is therefore a grave threat to the ocean, but the solutions to OA will help us address the other major environmental stressors facing our ocean.

The approach we take through the IOAI is to support and strengthen actors all over the world in their individual fights to understand and address ocean acidification. Scientists and policymakers worldwide look to us for advice and support. This is an embodiment of our mission as the only community foundation for the ocean. Everything we do has strengthened the ability of scientists, policymakers, and ultimately communities to monitor, understand, and respond to OA.

From the shallows to the depths of our blue planet, a crisis is occurring.

As Dr. Chris Langdon said at the meeting, “ocean acidification is not a future threat in Florida, it’s a present problem, and it’s only going to get worse.”

The ocean absorbs a significant portion of our carbon dioxide emissions, which is changing the chemistry of the ocean at an unprecedented rate.

The Ocean Foundation’s Ocean Acidification Guidebook for Policymakers is designed to provide already adopted examples of legislation and language to aid the drafting of new lawmaking to address ocean acidification. The ocean covers more than 71% of the planet, and you don’t have to dig very far to find out just how much we haven’t explored, don’t understand, and need to know to improve the human relationship with our planet’s life support system. Today the United States is rejoining the Paris Agreement, the global commitment to combat climate change through national and cooperative international actions. That will leave only seven nations of 197 …